By Thomas Zinser on December 21, 2013 in Inspiration, Paradigm Shift, The Mind 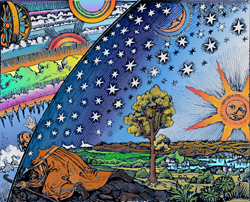 This post is a follow-up to the previous one on Dr. Dan Siegel and his model of the mind.

This is an excerpt from an article by Bernard Kastrup, Ph.D. entitled, Transcending Our Brain Created Reality: A New Call to Lift Nature’s Veil. I recommend the full article. You can find it here.

Dr. Kastrup goes further than Siegel to talk about the non-ordinary states of consciousness that are veiled by the psychological filters, both biological and cultural.

Looking Beyond the Veil

Solid evidence has been accumulating that our minds cannot be explained solely by brain activity; the mind seems to transcend the brain. Yet, it is undeniable that the brain plays a significant role in our perceptions and behaviour, as, for instance, the effects of alcoholic drinks make plain and clear.

In an earlier article in this magazine,5 I elaborated upon an alternative hypothesis for explaining the relationship between the mind and the brain; a hypothesis that, since the publication of that article, has gained increased scientific momentum: Consciousness is a fundamental aspect of nature, not depending on any material structure for its existence. The function of the body-brain system is to localise and restrict conscious perception to the space-time locus of the physical body. As such, the brain modulates and limitsconscious perception, this being why, in ordinary states of consciousness, mental states correlate so well with brain states.

As we’ve seen in the discussion above, such restriction and modulation of conscious perception – that is, the filtering and distortion of the copy of reality in our brains – can have a significant survival advantage, which explains why the brain evolved to perform such counterintuitive tasks.

Now, because the brain works as a kind of filter of mind, restricting and distorting our view of reality for survival purposes, bypassing certain brain mechanisms could conceivably give one access to a broader, cleaner, crisper, and more reliable view of nature. Historically, most, if not all, methods for achieving non-ordinary states of consciousness seem to do precisely that: To enable expanded perception and understanding by reducing brain activity.

The pattern here is so clear that it is surprising our culture seems to remain largely oblivious to it. For instance, many traditional Yogic breathing practices, as well as the more modern method of Holotropic Breathwork, reduce brain activity through the constriction of blood vessels that results from hyperventilation (which is precisely why you to get dizzy and ultimately faint when breathing too fast). Military pilots undergoing G-force induced loss of consciousness (G-LOC) – which forces blood out of the brain, thereby reducing its activity – are known to report transcendent narratives similar to near-death experiences. Teenagers worldwide play a dangerous, potentially fatal game involving partial strangulation in order to ‘trip’ without drugs.

Even psychedelic substances, which have always been assumed to produce ‘hallucinations’ by stimulatingbrain activity, have recently been shown to actually reduce brain activity.6 At least two Nobel Prize laureates – Francis Crick and Kary Mullis – have attributed their prize-winning insights to such non-ordinary states of consciousness; a powerful corroboration for the notion that such states broaden understanding and increase insight, despite reduced brain activity. Even more subtle methods, like meditation, ritual prayer, and sensory deprivation (think of isolation tanks) are likely associated to decreased brain activity.

The pattern here is as clear as it is ancient: Specific reductions in brain activity seem to consistently lead to a broadened and crisper perception and understanding of reality. The hypothesis that the brain is a mechanism to constrain and localise mind is entirely consistent with this: Reduction of brain activity impairs the filter/localisation mechanism, allowing one to temporarily and partially escape its entrapment and come closer to perceiving reality as it truly is.

A tantalising possibility suggests itself, one that has been lost to Western culture perhaps since the extinction of the Eleusinian mysteries: An unfathomably broader and more authentic inquiry into the true nature of reality can be achieved through an expansion of the investigator’s own state of consciousness. That true inquiry involves not only the transcendence of physical limitations through the use of instrumentation, but – and more fundamentally – a transcendence of one’s own brain-based mental filters. To see and understand reality for what it truly is – to see the original, not the flawed copy – we need to temporarily escape the limitations imposed on us by biology and culture.

‘Mindsight’ and the Soul
Mind Shift: The Idea That WILL Change Everything